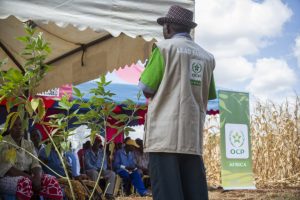 To help feed itself and the world, Africa needs to increase its crop yields. Neil Ford looks at how Moroccan phosphate miner and fertiliser producer OCP is helping to increase agricultural production on the continent.

As the world’s population passes the 8bn mark, global food security is attracting increased attention. Rising demand for food coupled with growing environmental pressures is placing more strain on already stretched international food supply chains. Africa’s role in meeting these challenges is crucial as the continent not only has the most rapidly growing population but also the greatest untapped agricultural potential.

Yet while food demand increases, the area of arable land under cultivation worldwide is expected to fall by about 24% between 2020 and 2060, as water becomes a more scarce resource and soils become increasingly degraded.

At the same time, unexpected shocks such as the Covid-19 pandemic and the Russian invasion of Ukraine repeatedly interrupt international supply and demand chains. These recent disturbances in the global commodities market have made fertilisers unaffordable for many African farmers. According to UN figures, fertiliser prices jumped 300% in the first two months of war breaking out in Ukraine.

With 60% of the world’s remaining unused arable land, Africa’s fertile soils have a key role to play in global food security. Yet the overall fall in global arable acreage means that it is vital to improve crop yields, including through irrigation and new seed strains but particularly through greater use of fertilisers.

Agricultural production is already buoyed by fertiliser use but access to such inputs has historically been more limited in Africa than in any other region.

This means that the continent has the most scope for increasing agricultural production through higher and more targeted fertiliser uptake. Wider fertiliser distribution can help in the short term by boosting yields, thereby immediately addressing the challenges of food insecurity prompted by skyrocketing commodity prices and export disruptions.

In the longer term, increased fertiliser use can help African farmers to boost the region’s food sovereignty, particularly during periods of crisis, by building resilient food systems.

Moroccan phosphate miner and fertiliser producer OCP has announced that it would ramp up its production from 3m tonnes in 2008 to an expected 15m tonnes next year.

Some of its new production will come from new plants it is building in sub-Saharan Africa, including in Ghana, Ethiopia and Nigeria, as well as from its Africa Fertiliser Complex in Jorf Lasfar in Morocco. OCP’s revenues increased 50% last year to D84.3bn ($7.97bn), with fertilisers accounting for 62% of income.

In order to support soil health and increased yields, OCP offers customised nutrients that are adapted to different crops and soils. It also supports precision farming techniques, such as mobile laboratories for soil mapping, on which it works closely with local governments and other partners.

Over the past decade, the company has invested in Africa-focused research and development with agronomic institutes and research universities on the continent, mapping 29m hectares of agricultural land that have allowed it to supply digital tools and the latest soil analysis technologies to farmers and others in the agricultural ecosystem, boosting yields by 30-100% in the process.

More than 3,000 soil samples were taken for analysis and 928 field trials conducted. The resulting fertiliser boosted yields by 24%.

OCP School Labs have already provided live demonstrations and interactive training sessions to more than half a million farmers, while its Farmer Hubs offer training and essential equipment. The Hubs have classrooms, water boreholes, soil-testing labs and greenhouses, as well as the fertiliser, seeds and agrochemicals needed for productive farming.

Agriculture already employs more people than any other sector in Africa, accounting for 50% of GDP over substantial areas of the continent, so improving cultivation methods can have wider benefits for living standards by generating income in rural areas.

Udongo has already been launched in Nigeria, Ghana, Côte d’Ivoire and Senegal, with further markets to be added in the near future. In a statement, OCP said that Udongo would enhance collaboration in the sector; improve the operational efficiency of actors in the value chain; create easy access to quality inputs, agricultural information and services for farmers; and promote digitisation in the industry.

Boosting African agricultural production through such initiatives could not only improve food security on the continent itself but also benefit global supplies. Building resilient food systems has long been a priority for the continent but international supply problems now make it an imperative.