Al Shabaab has turned into a shadow state and the Somali government, the United Nations and the international community need to reorient their focus. 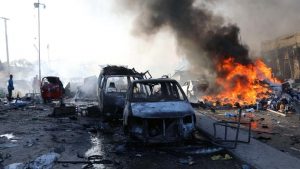 Somalia has been the paragon of retrograde politics, terrorism, and misery for three decades. The international community, its foot soldiers, and Somali political clients have fed rudderless strategies that reproduce the calamity.

Such behaviour is in contrast with the Somali people’s steadfast tenacity to weather the storm. Somalis have refused to be broken and have established enterprises that are the envy of others.

The late economic Nobel Laureate, Theodore Schultz, noted in his famous book “Transforming traditional agriculture,” that peasants will turn sand into gold if given an inch. Not unlike the proverbial peasant, Somali entrepreneurs have produced admirable enterprises despite towering odds: they boast the most successful native-owned telecommunication enterprises in Africa.

A phalanx of three forces appear dead set to blocking the remarkable contributions entrepreneurs can make to Somalia’s reemergence from decades of misery: the international community and the African Union, the parasitic local political class, and Al Shabaab.

The entanglements of these forces block every conceivable opportunity for local enterprises to gain a secure and legitimate working environment that is in sync with a legitimate international order.

Between the devil and the deep blue sea

The African Union and its backers, like the UN, have failed to secure Mogadishu and other major population centres from the menace of Al Shabaab. Their formulaic military strategy has failed to defeat the terrorist’s nimble strategy of combing guerrilla tactics and the silent but efficient administration of communal affairs even in areas controlled by the government.

Where the African Union has put troops on the ground in partnership with poorly trained Somali forces, Al Shabaab simply retreats from the area but its network of operators remain inside the ‘liberated” areas to intimidate the population.

Thus, two worlds exist in the same territory: a formal but ineffective presence of AU forces; and the invisible, elusive, but very real terrorists who control a lot of the population.

The Somali government mimics the strategy of the AU and has been unsuccessful in providing security for the population of the capital, Mogadishu. The regime’s inability to secure Mogadishu for the past two decades has enabled Al Shabaab to make any demands on the population.

Al Shabaab is not only a terrorist organisation, but it is also an effective administrative system that ‘gets the job done’. Here are three examples that demonstrate the terrorist’s deep and effective reach. First, a friend of mine bought a house for his ageing mother in the heart of Mogadishu. Al Shabaab agents informed the mother of the price she paid for the house, and the tax she would need to pay them. Alarmed, the mother relayed the message to her son. The son complained to his friends in government, but they told him that the safest bet is to pay. Fearful that the house might be destroyed or his mother might be hurt, the son paid the “tax.”

Second, Al Shabaab’s effective administrative strategy has deeply penetrated government institutions. It is able to know the exact details and values of commercial imports coming to the port of Mogadishu as it has access to the bill of lading of each container once a shipment of goods arrives at the port.

Al Shabaab’s agents contact the owners of the consignment and instruct them to pay import duties. Owners of the shipment pay the “tax,” lest their commodities be destroyed or their lives put in danger. The regime in Mogadishu knows about this extortion but has failed to deal with it.

Third, Al Shabaab has put a credible system of ‘justices’ in place to adjudicate conflicts and disputes. Government courts are so corrupt the public avoids them as they are known to serve the highest bidder. Individuals who are aggrieved then appeal to Al Shabaab for justice.

Agents of the terrorists call the accused to come to “Tora Tora” (the fictitious location of their court) to face justice. The accused has two choices: comply with the order or flee the country. The vast majority obey the order and receive a quick and effective ‘court’ decision and action.

In contrast, justices in government courts take an extremely long time and always rule in favour of the powerful. Tora Tora has a reputation for not accepting bribes.

The world is oblivious to much of what is happening. On October 12, the New York Times reported that local banks and financial institutions enabled Al Shabaab to move its money through their system.

Senior officials quoted in the Somali government and the Central Bank ignored the perilous environments that local companies operate within. The NYT failed to report how the government and the international community missed opportunities to establish the necessary infrastructure to secure the financial system. There were two ways this could have been accomplished.

Second, Mogadishu is so insecure that Al Shabaab can kill anyone at will who disobeys its direct orders. Securing Mogadishu would have eliminated a major source of income for the terrorists and emboldened the population.

On October 15, the UN Security Council is scheduled to discuss its most recent report on the matter. Tragically, the report blames the victims of Al Shabaab’s terror, the Somali entrepreneurs, for collaborating with the terrorists.

By contrast, the report exonerates the international community and the Somali government who have failed to build strategic public goods; secure the capital city where enterprises would feel safe from criminal extortion and danger; and establish a national ID to weed out the criminals. These two steps would have gone a long way to contain Al Shabaab’s activities.

In a nutshell, the Somali government harasses and imprisons citizens who pay Al Shabaab’s extortion money. Similarly, the UN and the international community impose sanctions and penalties on those suspected of collaborating with Al Shabaab.

However, neither of these authorities have created a secure environment for citizens to feel free from Al Shabaab’s tyranny. Finally, Al Shabaab kills and ruthlessly punishes citizens who fail to heed its agenda.

Such an environment makes most Somalis feel trapped which compels them to please three heartless tyrannies.