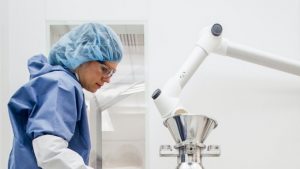 AstraZeneca has said it has the capacity to manufacture one billion doses. Credit: PA

AstraZeneca has said it has the capacity to manufacture one billion doses of the University of Oxford’s potential Covid-19 vaccine and will begin supply in September.

The pharmaceutical firm said it has secured the first agreements for at least 400 million doses of the vaccine.

It said it aims to conclude further deals in order to expand capacity over the next few months to “ensure the delivery of a globally accessible vaccine”.

On Monday, Health Secretary Matt Hancock said that if the University of Oxford’s Covid-19 vaccine candidate proves successful, then up to 30 million doses for the UK could be available by September.

The Oxford team is currently testing the vaccine candidate in humans.

Meanwhile, a separate group from Imperial College London is expected to start human trials next month.

However, some scientists have warned that a vaccine might not be widely available until next year.

Professor Robin Shattock, head of mucosal infection and immunity at Imperial College London, told the BBC he believes vaccines “won’t be readily available for widescale use until the beginning of next year as the kind of most optimistic estimation.”

AstraZeneca said it has now finalised its licence agreement with Oxford University for the “recombinant adenovirus vaccine”, which will now be known as AZD1222
Pascal Soriot, chief executive of AstraZeneca, said: “This pandemic is a global tragedy and it is a challenge for all of humanity.

“We need to defeat the virus together or it will continue to inflict huge personal suffering and leave long-lasting economic and social scars in every country around the world.

“We are so proud to be collaborating with Oxford University to turn their ground-breaking work into a medicine that can be produced on a global scale.

“We would like to thank the US and UK governments for their substantial support to accelerate the development and production of the vaccine.

“We will do everything in our power to make this vaccine quickly and widely available.”

The company said on Thursday that is has received more than £820 million from the US Biomedical Advanced Research and Development Authority (Barda) for the development, production and delivery of the vaccine, starting in autumn.