Better vaccines are in our blood 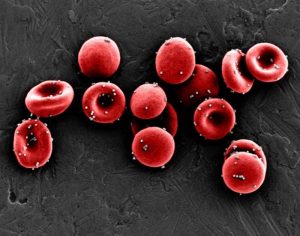 Red blood cells do more than shuttle oxygen from our lungs to our organs: they also help the body fight off infections by capturing pathogens on their surfaces, neutralizing them, and presenting them to immune cells in the spleen and liver. Now, a team of researchers from Harvard’s Wyss Institute for Biologically Inspired Engineering and John A. Paulson School of Engineering and Applied Sciences (SEAS) has harnessed this innate ability to build a platform technology that uses red blood cells to deliver antigens to antigen-presenting cells (APCs) in the spleen, generating an immune response. This approach successfully slowed the growth of cancerous tumors in mice, and could also be used as a biocompatible adjuvant for a variety of vaccines. The technology, called Erythrocyte-Driven Immune Targeting (EDIT), is reported this week in PNAS.

“The spleen is one of the best organs in the body to target when generating an immune response, because it is one of the few organs where red and white blood cells naturally interact,” said senior author Samir Mitragotri, Ph.D., a Wyss Core Faculty member who is also the Hiller Professor of Bioengineering and Hansjörg Wyss Professor of Biologically Inspired Engineering at SEAS. “Red blood cells’ innate ability to transfer attached pathogens to immune cells has only recently been discovered, and this study unlocks the door to an exciting array of future developments in the field of using human cells for disease treatment and prevention.”

Don’t eat me, just check me out

Using red blood cells as delivery vehicles for drugs is not a new idea, but the vast majority of existing technologies target the lungs, because their dense network of capillaries causes cargoes to shear off of red blood cells as they squeeze through the tiny vessels. Mitragotri’s research team first needed to figure out how to get antigens to stick to red blood cells strongly enough to resist shearing off and reach the spleen.

They coated polystyrene nanoparticles with ovalbumin, an antigenic protein known to cause a mild immune response, then incubated them with mouse red blood cells. The ratio of 300 nanoparticles per blood cell resulted in the greatest number of nanoparticles bound to the cells, retention of about 80% of the nanoparticles when the cells were exposed to the shear stress found in lung capillaries, and moderate expression of a lipid molecule called phosphatidyl serine (PS) on the cells’ membranes.

“A high level of PS on red blood cells is essentially an ‘eat me’ signal that causes them to be digested by the spleen when they are stressed or damaged, which we wanted to avoid. We hoped that a lower amount of PS would instead temporarily signal ‘check me out’ to the spleen’s APCs, which would then take up the red blood cells’ antigen-coated nanoparticles without the cells themselves getting destroyed,” said Anvay Ukidve, a graduate student in the Mitragotri lab and co-first author of the paper.

Having confirmed that their nanoparticles were successfully delivered to the spleen in vivo, the researchers next evaluated whether the antigens on the nanoparticles’ surfaces induced an immune response. Mice were injected with EDIT once a week for three weeks, and then their spleen cells were analyzed. Treated mice displayed 8-fold and 2.2-fold more T cells displaying the delivered ovalbumin antigen than mice that were given “free” nanoparticles or were untreated, respectively. Mice treated with EDIT also produced more antibodies against ovalbumin in their blood than either of the other groups of mice.

To see if these EDIT-induced immune responses could potentially prevent or treat disease, the team repeated their three-week prophylactic injection of EDIT into mice, then inoculated them with lymphoma cells that expressed ovalbumin on their surfaces. The mice that received EDIT had about three-fold slower tumor growth compared with the control group and the group that received free nanoparticles, and had lower numbers of viable cancerous cells. This outcome significantly increased the window of time during which the tumor could be treated before the mice succumbed to the disease.

“EDIT essentially is an adjuvant-free vaccine platform. Part of the reason why vaccine development today takes so long is that foreign adjuvants delivered along with an antigen have to go through a full clinical safety trial for each new vaccine,” said Zongmin Zhao, Ph.D., a Postdoctoral Fellow in the Mitragotri lab and co-first author of the paper. “Red blood cells have been safely transfused into patients for centuries, and their ability to enhance immune responses could make them a safe alternative to foreign adjuvants, increasing the efficacy of vaccines and speed of vaccine creation.”

The team is continuing to work on understanding exactly how an immune response that is specific to the antigen presented by EDIT is generated by the spleen’s APCs, and plans to test it with other antigens beyond ovalbumin. They hope to use this additional insight to drive their pursuit of the optimal clinical setting(s) for the technology.

“The human body is a treasure trove of elegant solutions to healthcare problems, and while medicine has come a long way in understanding those mechanisms, we are still in the early stages of being able to harness them to improve the length and quality of human life. This research is an exciting step forward toward that goal, and could dramatically change how immune responses are modulated in patients,” said the Wyss Institute’s Founding Director Donald Ingber, M.D., Ph.D., who is also the Judah Folkman Professor of Vascular Biology at Harvard Medical School and Boston Children’s Hospital, and Professor of Bioengineering at SEAS.

Additional authors of the paper include Vinu Krishnan, Daniel C. Pan, Yongsheng Gao, and Abhirup Mandal from the Wyss Institute and SEAS; Alexandra Fehnel from SEAS, and Vladimir Muzykantov from the Perelman School of Medicine at the University of Pennsylvania. This research was supported by the Wyss Institute at Harvard University and the National Institutes of Health under grant # 1R01HL143806-01.