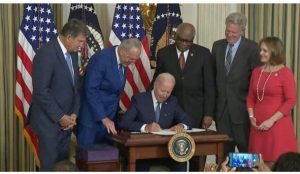 President Joe Biden on Friday signed the National Defense Authorization Act into law, a massive defense spending bill with provisions that will give service members a pay raise, fund support for Ukraine and Taiwan and rescind the US military’s Covid-19 vaccine mandate.

In a statement following the signing of the NDAA, Biden said the act“provides vital benefits and enhances access to justice for military personnel and their families, and includes critical authorities to support our country’s national defense, foreign affairs, and homeland security.”

The Senate voted last week to pass the massive NDAA with bipartisan support. It follows the House’s bipartisan approval of the legislation the week prior.

The defense bill outlines the policy agenda for the department of defense and the us military and authorizes spending in line with the Pentagon’s priorities. But it does not appropriate the funding itself. The legislation, which authorizes $817 billion specifically for the Department of Defense, will provide $45 billion more than Biden’s budget request earlier this year.

The NDAA includes provisions to strengthen air power and land warfare defense capabilities, as well as cybersecurity. And it shows Congress’ continued support for helping Ukraine repel Russia’s invasion, even though several Republican lawmakers have raised questions about the ongoing US aid. Additionally, the NDAA establishes a specific defense modernization program for Taiwan to deter aggression by China.

Among a series of provisions to support service members and their families, the funding will provide a 4.6% increase in military basic pay for service members – the largest in 20 years. The Department of Defense’s civilian workforce will get the same raise. It also bumps up service members’ housing allowance.

In addressing service member suicides, the act requires the Secretary of Defense to compile a report on suicide rates within the ranks.

The act also ends the requirement that troops receive the Covid-19 vaccine. However, it will not reinstate members of the military who were discharged for refusing to get vaccinated.

White House press secretary Karine Jean-Pierre previously said the White House had viewed the removal of the vaccine mandate as“a mistake,” but she declined to say whether Biden would sign a bill that ends the requirement, noting that the president would“judge the bill in its entirety.”

Biden said in his statement on Friday that while he’s pleased the funding bill supports several critical objectives,“certain provisions of the Act raise concerns.”

he repeated past concerns about barring funds to transfer Guantanamo Bay detainees into the custody of certain foreign nations and several“constitutional concerns or questions of construction” over other provisions – including concerns about the transmission of highly sensitive information to Congress.

Biden also called a portion of the NDAA requiring that documents, including presidential communications, be shared unconstitutional.