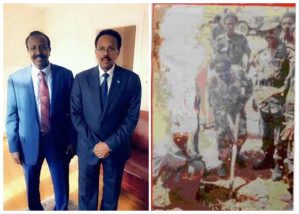 The head of the federal government in Somalia, Mohamed Abdillahi Mohamed, “Farmaajo”, has been photographed with convicted war criminal, Colonel Yusuf Abdi Ali, aka Tuke.

Col. Tuke a former Somalia military officer was convicted of torture at a Virgina court earlier this year. The torture took place in Gabiley, Somaliland, during the civil war in the late 1980’s. Col. Tuke was fined $500.000

The convicted torturer, Yusuf Abdi Ali, then sought asylum in Canada, and was deported from Canada, after it was proven that he had lied in his original asylum application.

The convicted torturer,Yusuf Abdi Ali, is now facing deportation from the United States of America.

During his time in the United States, convicted torturer, Yusuf Abdi Ali, worked among other places, as a security guard at Dulles International Airport and as a driver for Uber and lyft.

After an expose by CNN and CBS’s “60 minutes”, he was fired by both companies.

The photo of the two men was taken a few days ago at the opening of the new Somali office in Washington, DC. Our sources confirm that, Yusuf Abdi Ali, has been appointed security guard at the office