Mr. Rashid Abdi, a Somali scholar from Kenya, said that the Kenyan government will open an office in Hargeisa as one of the experts in Kenya.

Rashid Abdi, a former member of the International Committee of the Red Cross (ICG) and an expert on the Horn of Africa region, said in a statement on his Twitter account that the Kenyan office in Hargeisa would be headed by Ambassador Philip Mundia. Githiora.

The Russian-speaking diplomat has worked extensively at Kenya’s embassies abroad.

Finally, the Kenyan government has reported on several occasions that it will open a diplomatic bureau in Somaliland, but the latest news is that Philip Mundia Githiora, one of Kenya’s diplomatic experts, will be in charge. 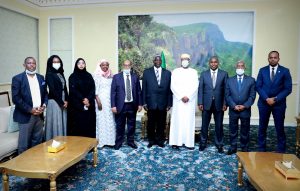 Philip Mundia Githiora’s statement came a week after the President of Somaliland met with visiting members of the Kenyan Parliament.