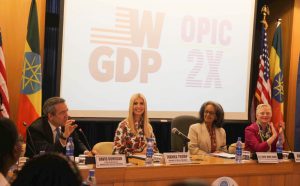 Addis Ababa, Ethiopia – David Bohigian, Acting President and CEO of the Overseas Private Investment Corporation (OPIC), the U.S. Government’s development finance institution, and Advisor to the President Ivanka Trump today announced the launch of OPIC’s 2X Africa initiative to support investment in women in Africa. The announcement was made during a U.S. Government delegation to the country.

Through the initiative, OPIC aims to unlock the full economic potential of women in Africa by catalyzing $1 billion, directly investing $350 million, to businesses and funds owned by women, led by women, or providing a good or service that intentionally empowers women on the continent.

“For women to succeed as entrepreneurs and job creators we must ensure they have equal access to the financing necessary to start and grow their businesses,” said Advisor to the President Ivanka Trump. “In furtherance of this goal, it is my honor to announce a new landmark initiative within W-GDP, 2X Africa, to directly invest capital into supporting women-owned, women-led, and women-supporting projects in Sub-Saharan Africa.”

“The launch of 2X Africa underscores OPIC’s recognition of the critical role that women play in tackling Africa’s most pressing development challenges,” said OPIC Acting President and CEO David Bohigian. “By strengthening our focus on the women of Africa, OPIC will foster prosperity and stability in the region, and support the Administration’s important efforts to advance global women’s economic empowerment through W-GDP.”

OPIC’s 2X Women’s Initiative aims to harness the multi-trillion dollar opportunity women represent by catalyzing investment in projects that support the world’s women. One year since the launch of the initiative, OPIC in March announced that it had surpassed the initiative’s initial target to mobilize $1 billion to the world’s women.