The President of the Republic of Somaliland, Muse Bihi Abdi, has met with a delegation from the State of Qatar. 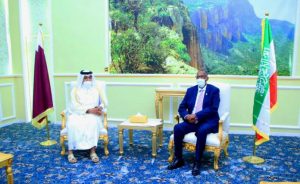 The delegation which was led by senior Qatari Foreign Affairs official, Dr. Mutlaq Bin Majed Al-Qatlani are in Somaliland on an official visit.

The President and the delegation discussed areas of mutual interest, including closer diplomatic ties, with the possibility of Qatari representative office in Hargeysa.

The new engagement between the two countries comes after years of strained relationship due to the geopolitical struggles in the Gulf Region between, on one hand, Somaliland allies, the United Arab Emirates and Saudi Arabia, and on the other, Qatar.

Somaliland has also been wary of Qatari approaches due to that nations heavy involvement in the affairs of the neighbouring and former union partner, Somalia.

Sources indicate that since the thawing of the tense political situation in the Gulf, this Qatari visits marks a new chapter in the relations between the two states.