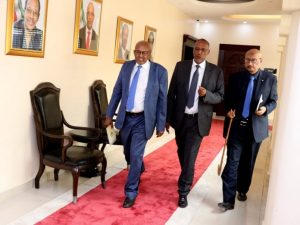 Somaliland: Talks On Elections And The NEC Fail

The talks held today at the Presidency in Hargeisa between the leaders of the three Somaliland political parties, Kulmiye, Waddani and UCID have failed to produce an agreement.

The talks which were hosted by the President of the Republic of Somaliland, Muse Bihi Abdi, and attended by the chairs of Waddani, Abdirahman Mohamed Abdillahi ” Cirro” and UCID’s, Faisal Ali Warabe, have once again ended in a stalemate.

According to sources, the inability on all sides to agree on the state of the newly appointed Somaliland National Elections Commission, NEC, has led to the failure of the talks.

The long overdue Somaliland parliamentary and local elections have been postponed time after time, and it seems very unlikely that there will be a vote this year.

The Somaliland House of Representative, whose mandate expired over a decade ago, has been sitting on extension after extension granted by the House of Elders, Guurti, who themselves have been sitting for close to three decades.