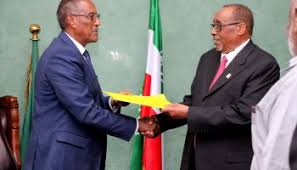 Somalilan is a country that has lost a vital hold on its past. It is the historical equivalent of leaving an ailing mother alone in her home, closing the door, and never seeing her again. A moral lobotomy occurs; the central decency perishes and after that, any deed is possible.

Indecency began on national level. The year 2010 was a defining year in the career of indecency, when Somaliland people became unabel to digest the significance of the value of their votes and emotions led them to elect Siilaanyo into the nation’s highest post.

History reminds us who Siilaanyo has become after winning 2010 presidential election. That he never vibed with the masses either in his political or private life is nothing new. Nor is his hypocrisy a discovery. His promises and political programmes during his election campaign did not also sell anything and were just a tangle of vague outlines that did not even embellish speech or writing.

Here’s an age-old question: Is Siilaanyo actually more corrupt than any other Somaliland elected president? Or
do Somaliland people make fuss about Siilaanyo since he was not up and around in most of the time?

What we’re sure about is that 2010 wound up being the year in which a disgrace and dirty politics began in Somaliland and Somaliland citizens were plunged into abject, bottomless despair.

Siilaanyo’s reign was an era in which the rich grew richer, the poor poorer, the crooks got the convenient time for corruption avenues, the elected officials ignored their constituencies, everybody tried to achieve deceptively what they could not gain diligently, horrible deals got rammed through government offices, and alleged diaspora scams even ran many ministries, and barely anyone faced real consequences.

The scandal of eighty-million-dollar debt that the previous Kulmiye administration transferred to the current administration is just a fraction of what Siilaanyo and his gang have stolen from Somaliland public treasury. Just imagine how many government premises were sold for no reason, how much money DP world had given to Siilaanyo and his entourage. A mansion in Dubai is among the rewards DP has offered to Siilaanyo.

None of us is aware of where the prospects of Berbera port in two half years go. None of us has seen the original contract between Somaliland and DP World. The yearly Berbera Port prospects are millions of dollars, but all that money, which is also a fraction of the debt MPs just discovered yesterday, goes into few peoples’ pockets, while 90 percent of Somaliland citizens live below the poverty line. If the opposite is true, why the prospects did not appear in the government budgets for 2018 and 2019?

Colonel Muse Biixi will not sit idle. He will label the information of the debt as a dream of every opposition, and will intervene. He will turn into Saad Ali Shire and force him for denying the debt allegation. Muse Biixi has been in politics and Kulmiye politics is about survival first and consequences later.

What does the system do when it does not have an answer for such a case as this? It changes the route of resolving the scandal. Witness how the rage against the cover up of the debt in parliament will be manoeuvred into a debate.

In our country, corruption has become mainstream; bribery a polished armor that adorns and defends, which is why Kulmiye system has developed technical expertise at deflecting street anger.

The game will be played out not in legal procedures, but in payments of bribe, and we will see hypocrisy trapping all prominent people in slow motion. That is how a corrupt state defines victory over public anger.

A protest is a form of liberation. Bearing the payment of an unjustifiable debt deserves a public protest. Covering up and concealing it intentionally is a crime that deserves condemnation.

A casino has its rules. If you are not playing for money, you will always lose your reputation. Many of us knew that Kulmiye party will breed non but wicked politicians. Who is the thief to be impeached? The one who transferred the unjustifiable debt? Or the one who covered up and concealed the debt?

As per usual the opinions expressed in this articale are those of the author and do not reflect the opinions of qarannews.com