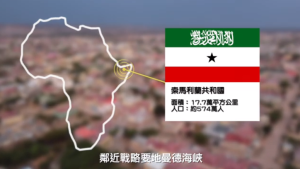 A short film that highlights Taiwan’s contribution to Somaliland’s development was released Jan. 3 by the International Cooperation and Development Fund. (Courtesy of TaiwanICDF)

The 5:52 minute film details various bilateral projects implemented by TaiwanICDF to develop Somaliland’s capabilities. These include e-government services, improvement of agricultural production, management of medical information, provision of maternal and infant healthcare and training of healthcare professionals, among other key areas.

Personnel cultivation is another important strand of the robust cooperative relationship, TaiwanICDF said, citing government sponsorship and scholarships for Somaliland officials and NGO staff to receive training in Taiwan.

The film also paid tribute to members of Taiwan’s diplomatic and technical missions for their contributions to expanding the bilateral relationship with the East African state.

Located in the Horn of Africa, Somaliland enjoys a close friendship and many years of mutually beneficial collaboration with Taiwan. Both sides share the universal values of freedom, democracy, respect for human rights and the rule of law, according to TaiwanICDF.

Since the opening of respective representative offices in 2020, the two sides have successfully collaborated in projects spanning agriculture, education, health care, resources development and trade, the organization added. (SFC-E)

Write to Taiwan Today at ttonline@mofa.gov.tw